Your voice has been HEARD! Congressional hearings on testing announced!

At the conclusion of NPE’s first national conference in Austin, TX we requested that the Health, Education, Labor and Pension Committee holdhearings to investigate the over-emphasis, misapplication, costs, and poor implementation of high-stakes standardized testing in the nation’s K-12 public schools. In our statement we asked 11 essential questions about testing which you can read here.

We asked you to call and write your representatives, and you responded.

You have been heard, and now the Committee has questions of its own.

Senator Lamar Alexander (R) was Secretary of Education under George H.W. Bush, and selected NPE President Diane Ravitch as his Asst. Secretary for Research. Sen. Alexander became the Chair and ranking Republican on the Senate’s Health, Education, Labor and Pension Committee, on January 7, 2015 and now he has questions he wants answered too.

“Every parent, every teacher in 100,000 public schools is asking the question, ‘Are there too many tests?’ “Alexander said in an interview Thursday. “I don’t know the answer. I’m asking the question. And the United States Senate ought to be asking that question as we think about No Child Left Behind.”

It has been widely reported that on Tuesday, January 20th, the same day as the State of the Union address, the Committee on Health, Education, Labor and Pensions will indeed hold hearings on testing as part of Sen. Alexander’s desire to oversee a reauthorization of the Elementary and Secondary Education Act (ESEA) that has been stalled since 2007.

In a prepared speech this morning, delivered at Seaton Elementary School in Washington DC, Secretary Arne Duncan made clear that the administration is committed to annual standardized testing. “All students need to take annual state standardized tests that are aligned to their teacher’s classroom instruction in reading and math in grades 3-8 and once in high school.” – Arne Duncan, January 12, 2015 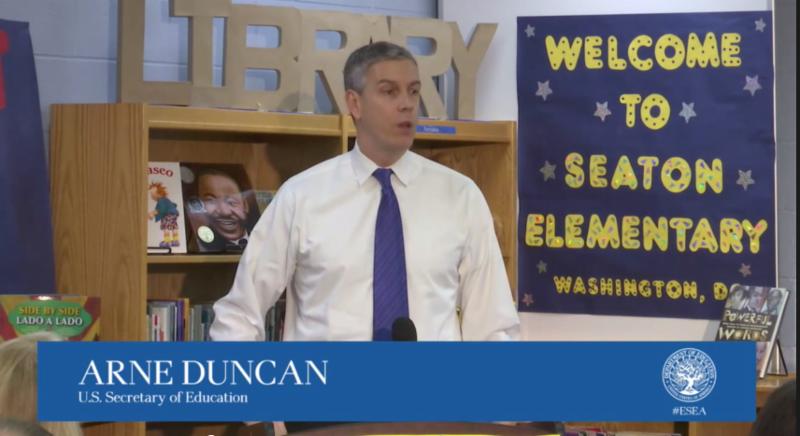 The trouble for Secretary Duncan is the tests remain wildly unpopular with parents and teachers, and since the advent of NCLB the focus on testing has done little to raise student achievement or diminish inequities in our schools. Pushback is mounting nationwide with parent groups and teachers unions leading the charge. Opt-out groups are growing exponentially, and are expected to only continue to gain momentum as Common Core aligned PARCC and Smarter Balanced tests are administered for the first time this spring.

Secretary Duncan does have allies in his quest to maintain the federal mandate for annual testing, however. Some are likely allies, such as the Council of Chief State School Officers and the Business Roundtable, which is “an association of chief executive officers of leading U.S. companies.”

Some are less likely, including a group of civil rights organizations that released a statement in support of the reauthorization of ESEA, including the need for annual testing.

The debate is certain to be lively and passionate, and we want you to be a part of it! NPE will provide frequent updates as information becomes available, so please make sure you like us on Facebook and/or follow us on Twitter. We will also send newsletters and action alerts as necessary. You can join our newsletter by signing up on our home page.