Betsy DeVos was confirmed by the Senate this morning. Are you furious? So are we. But don’t be disheartened. Our nation’s children need us more than ever before.

The opposition that you helped generate was so intense, that the Vice President had to step in to break the tie in order for her to be confirmed.  Forty-eight senators held the floor throughout the afternoon and night, delaying the vote as long as they could.

Your opposition to what DeVos stands for was nothing short of remarkable.

Because of you, NPE generated a half million emails to senators. Over 100,000 also accessed our Toolkit and HELP committee lists—making phone calls, sending faxes, and visiting offices. You contacted our office by mail and by phone asking, “What more can I do?” 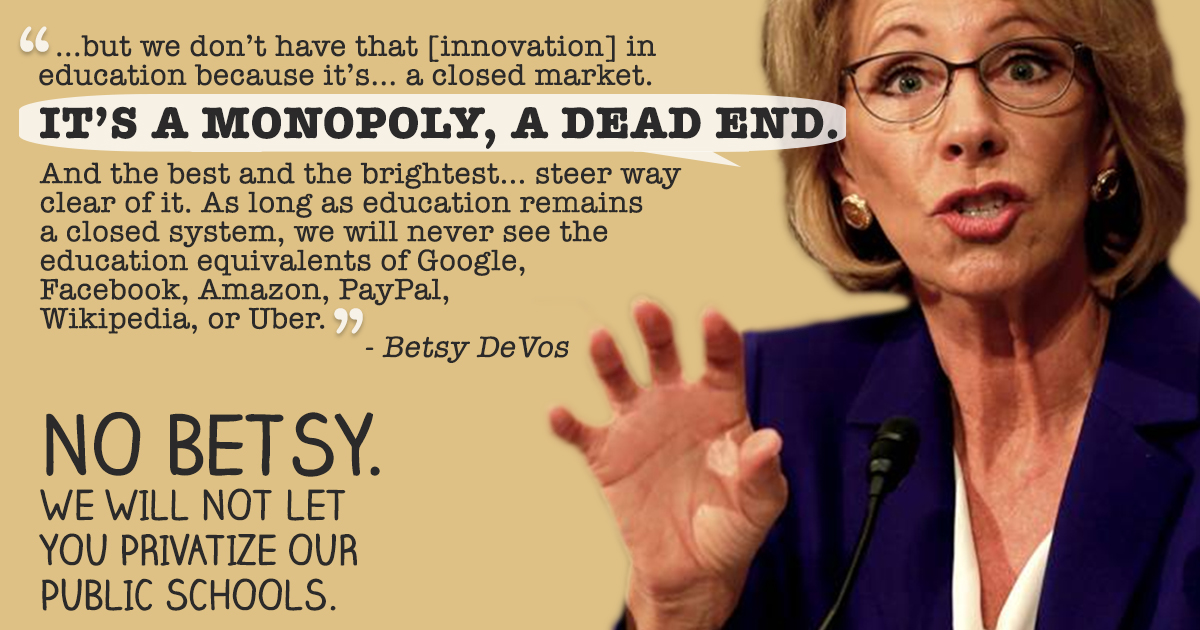 Where do we go from here?

As our President, Diane Ravitch, recently told me, NPE was born for this moment. Diane understood the forces trying to privatize our schools. She recognized the agenda of DeVos and those like her, long before most of us did, and thus the Network for Public Education was born to fight against the destruction of our public schools.

Stick with NPE. We will not give up the fight.

This is what we promise to do with your help.

·       Whenever a state tries to further the DeVos agenda to destroy public schools and push privatization, we will be there. We will issue an Action alert and let you know what you can do.

·       Whenever Congress tries to further the DeVos/Trump agenda to destroy public schools and turn education into a business, we will alert you. We will give you easy tools to use to fight back and to share with neighbors, family and friends.

·       If there is an attempt to take the federal funding designed to support students in poverty or students with disabilities, NPE will let you know and we will immediately mobilize resistance.

·       We will provide resources, education and talking points that you can use and share. We will issue reports about charters, vouchers, online schools and student data privacy to give you the facts you need to convince others.

·       We will help you organize at the local level so that you can join with friends and neighbors and fight back. Our Grassroots Network is in place and we are ready to support you.

The Network for Public Education is a 501 c (3) that allows donations to be tax deductible, so lobbying is limited and we cannot endorse candidates. NPE Action, however, is a 501c (4)  and it can lobby and endorse candidates who believe in public schools. Both organizations will fight to preserve, support and improve our public schools, the pillar of our democracy.

Take a moment to let us know who you are and what you care about, by taking this short survey. We will never share your information with other groups or individuals. Take that 6 question survey here.

As Diane always says, “We are many. They are few. We will organize, mobilize and fight their attacks on our children, our educators, and our public schools. Together, we are powerful. ”

The Network for Public Education will not allow DeVos and her allies to destroy our public schools—not on our watch. Keep in touch and get others to join the fight here.

And you can see how your senators voted on this important decision here.

Thank you for all you do,