Leonie Haimson: About Those NAEP Scores

The National Center for Education Statistics, the folks who bring us the NAEP–“America’s Report Card”– have been trying to get folks to look past the panicked headlines about how schools have lost twenty years of progress. There is, they’d like to point out, considerably more nuance to the results, and it would be great if folks would look more closely at the issues before prescribing bad solutions. One [person who was paying attention was Leonie Haimson. This post dips into some of the details. Reposted with permission.

Results of the long-term NAEP exams for 9 year old students, showing a sharp decline in test scores between 2020 and 2022, has re-fueled the already incendiary debate about whether closing schools even temporarily during the height of the pandemic was the right decision, or whether as Nate Silver argued, “it produced once of the biggest policy disasters in a generation.”

At the time, in March of 2020, with our hospitals full and Covid victims dropping like flies left and right and virologists and epidemiologists begging the Mayor to close our schools, it certainly seemed like the right decision.

Even now, as Commissioner of the National Center for Education Statistics (NCES) Dr. Peggy Carr pointed out today at a NAEP online briefing,  the pandemic had many effects that transcended school closures that could have had negative impacts on learning and test scores, including death of family members, their loss of jobs, and widespread illness and absentees, including of students themselves. 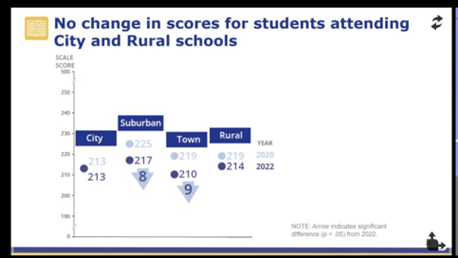 Moreover, the results from the long-term NAEP itself are so far unclear that remote instruction was the primary factor.   For example, there was no drop in average reading scores in cities – where there were more frequent school closures, though the declines were significant in suburbs and towns.

Fewer kids learned remotely in Midwest compared to Northeast, according to surveys undertaken in conjunction with the NAEPs.  Yet the average declines in math and reading in those parts of the country were about the same. 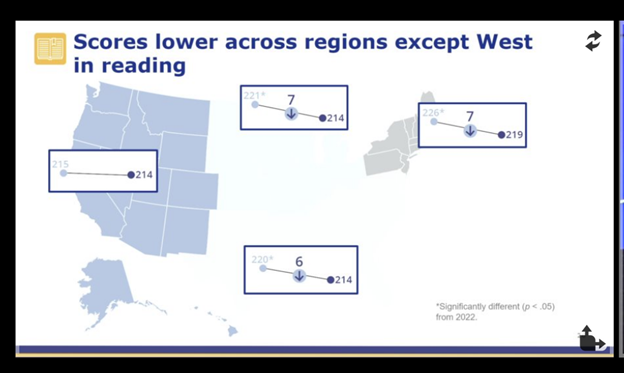 The student ethnic group that was most likely to learn remotely was Asian – and yet that group also exhibited no statistically significant decline in reading or math scores.

Even if a rigorous analysis eventually concludes that those students who engaged in remote learning were also most likely to have low scores compared to years past, it is difficult to retroactively judge that closing schools during the height of the pandemic was the wrong decision at that time.

The other unfortunate response to the test score decline is the prescription from “experts” on how to address it.  In the NY Times, Martin West proclaimed that the only solution was an “ increase instructional time” through a longer school day or year, even though the research on this measure is very weak, as I’ve written about here and here. It has been tried repeatedly and failed in NYC schools, including in the Renewal schools.  US students already spend more time in the classroom than those in most every other country.  Moreover, last year about $600 million in federal funds remained unspent in NYC schools, much of that for extended instructional time in the form of  afterschool and Saturday “recovery programs”.  Many students didn’t want to attend these classes, and most teachers who already felt burnt out didn’t want to teach them.

After years of steady progress, NAEP scores had already begun to  flatten, with stagnant or declining test scores in reading and math in nearly all states in the decade since 2009.   These results, as I argued here, were most likely a consequence of the lingering impact of  the great recession, which led to class size increases and thousands of teacher jobs lost, and the imposition of the Common Core standards.  As might be expected, the negative impact was felt most sharply on the highest-need students. The gap between high-performing and struggling students significantly widened, and the pandemic has made the gap wider still. 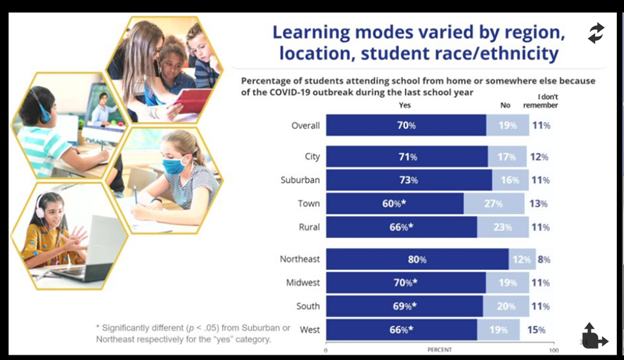 Struggling students and their teachers have suffered through one round of false and damaging policy prescriptions.  Instead of longer days and years, what education leaders should be doing now is narrowing that gap by reducing class size, one of a very few reforms proven to do just that. As noted education researcher  Gene Glass has concluded, “Within reason, the productivity of the schools is not a matter of the time allocated to them as much as it is a matter of how they use the time they already have.”  Instead, our Mayor seems intent on cutting school budgets and increasing class size, while we sit and wait for Gov. Hochul to sign the class size bill.  Please sign our petition, urging her to do so now.

The original post includes screenshots from the NAEP briefing.